Celebrating the Fourth of July with its family time, picnics, and parades is exciting for children in the United States. But wherever you live, fireworks are sure to be a part of one of your holiday experiences. They are sure to be seen and heard in places all over the U.S. These bursts of color can be wonderful shows for some children while others may be a bit afraid of the noise. You can help prepare children for the excitement by talking about the streams of color in the sky and the loud booms that will be heard. Follow up this discussion by having children create their own pictures showing a fireworks display. And you can help develop fine motor skills at the same time!

To make a fireworks painting, put away the paintbrushes and get out eyedroppers. Why? Using eyedroppers allows children to make streams of color to mimic the falling lights of the fireworks. But the best part of using eyedroppers? By having children use their thumb and forefinger to squeeze the eyedropper bulb and then sweeping the paint across the page, mimics the finger control children need for using scissors. This is an excellent way to prepare young hands for the difficult task of cutting.

Help children squeeze the paint into the eyedropper using the bulb. We find children need assistance with this. 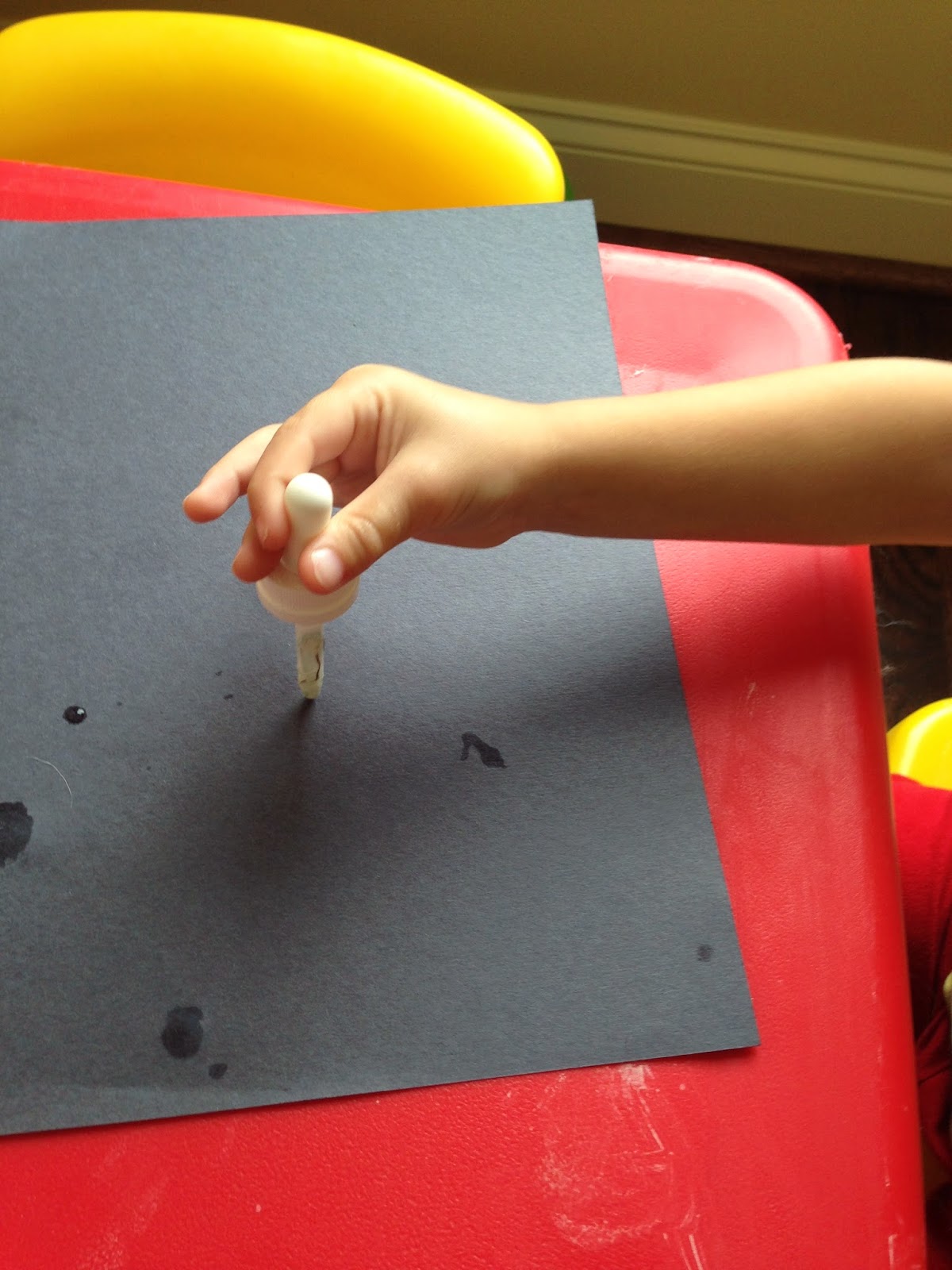 Then show them how to squeeze the paint out of the eyedropper by using their thumb and pointer finger. Most children easily understand this and delight in streaming the “fireworks” across the night sky paper.

Ask children to explain their paintings when they are finished and dry. Verbalizing the sights and sounds of fireworks may result in fewer fears during a celebration. Your child has also practiced key movements for handling a scissors.

Taking a walk, looking out of a classroom window, or even riding in a car can be exciting for a preschooler. Take these "natural" opportunities to get children excited about nature! Encourage lots of talk about what can be seen. Point out birds in the sky, a rabbit in the grass, or a cloud in the sky that might resemble an animal. To make these observations more fun and to develop key school readiness skills, work with your child (children) to make a pair of binoculars.

Once children are excited about binoculars, show them how to take a paper towel roll and cut it in half. This simple instruction and demonstration develops an understanding of fractions!

We like to use simple painter's tape rather than yarn or string, which can be a bit difficult for young children to handle. Some children may even be able to tear (or begin to tear) the tape themselves which is a wonderful way to develop hand muscles for fine motor control.

Put together the paper towel roll as shown below:

Then enjoy a walk. Talk about the birds in the sky. Compare them. What colors did you see? How big is one bird compared to another? Take a look in the grass. Do you see a bunny rabbit?

While these binoculars will not really "work," of course, they will help guide children's eyes to all the wonders of the natural world!

Our favorite part of this activity? Listening to children say the word, binoculars!
Posted by Kathy at 3:12 PM No comments:

We love to encourage creative thought along with helping children to express their understanding of various animals. Sorting is a wonderful way to help children describe the attributes of objects or pictures. The best part is there is no right or wrong answer! Children can explain their thoughts and if they make sense, then the sort is correct!

To help children think more about animals, we cut out several pictures from magazines. We avoided cutting them in perfect squares or circles to model that any shape was fine as children often avoid cutting something out because they think it must look perfect.

Ask children to look at all of the pictures and to talk about what they see. You may be surprised at what children notice. Some children may talk about an animal’s coloring while others may describe features such as number of legs, if it has fur, or can fly. These are important and can lead to many questions such as, “How does this animal get from place to place?” You can even introduce scientific vocabulary such as migrate to talk about animals that move, depending upon the weather and food supply.

Give children various papers and have them place the pictures in groups. You will see below that this child first started placing animals that had a pattern together. Then he changed his mind. Asking children to explain this is a good way to develop expressive language.

After some thinking time, which is what we at Maggie’s Big Home love to encourage for anyone, the child decided to arrange (or sort) his animals according to where they lived.  He chose to put all the animals that lived on land together and those that lived in the water together, as shown below.

He thought very carefully about the duck and had a difficult time placing it as living on land or in water. He finally was able to say, “I think he sleeps on land.” That is where the duck was glued in his sort.
One final note, while this activity helps children think about animal attributes, it also develops expressive language not to mention that gluing is sure to strengthen hand muscles to aid in fine motor development.
Posted by Kathy at 7:07 PM No comments:

A Walk Through Summer: Nature and Inquiry

What is your child doing this summer? Attending various camps, playgroups, going to his or her regular daycare, or even staying home? Many children do a variety of activities in the summer that are different than those offered during a regular school year.  Families, counselors, daycare providers, and teachers can help get preschoolers ready for school and learning using age-appropriate and fun activities.

We have previously discussed some of the learning that can take place on a simple walk. Read our previous posts for ideas regarding activities and questions to help children better understand science and creativity! We hope you will share these thoughts on developing inquiry.

This week, we continue our "walk" through summer. Why not have your child (or children) carry a large magnifying glass on an outing? Encourage children to stop whenever they see something that is interesting.
For some children this may be something as simple as a pine needle. One child said, "I think pine needles are for building rocket ships." We wondered about this observation. The child continued with a story of how he had once used pine needles to glue onto a tissue paper roll as fire and steam coming from a rocket. That child continued by looking at the tree and said, "But I think pine needles are really for trees. Maybe they help the tree get sunshine." This is inquiry! The child wondered about something, asked himself a question, and tried to answer it based on his observations.

The best part of taking a leisurely stroll is that you never know how nature will surprise you. On one walk, this child spotted something interesting.

He bent down and examined it with the magnifying glass. The child described it in detail using vocabulary such as, "looks like paper with colors" and "it has a pretty design that looks like diamonds." These kinds of observations build expressive language.

While it was tempting for the adult to simply tell him what it was, the child was given the opportunity to look it up on the Internet. Of course, an adult found similar objects for him to chose from on-line. He was able to say it was almost like one of the Internet images. The adult read the words to him, describing it as a snakeskin. This helped the child learn the importance of informational text and that resources can help answer questions.

Finally, the child found a play snake in his toys. This was turned so it looked like the letter S. Now the child was off on a new adventure: finding other objects that began with S. This letter had new meaning!
Posted by Kathy at 12:25 PM No comments:

Develop A Pencil Grip With Ease (and Fun!)

We hear so much about incorrect pencil grips these days. What is the cause for all of this trouble? Some hypothesize it is the technology children use at younger and younger ages. Others suggest we put writing utensils in the hands of children before they are ready to manipulate pencils, crayons, and markers. Likely, in our “hurry-up” society, it is a combination of these and other factors. What we do know is that kindergarten teachers ask that children entering school be more adept with fine motor skills.

How can we do this? Our response is to help children develop fine motor skills naturally: through play and exploration.

As children enjoy the out-of-doors, encourage them to use a pincer grasp (thumb and pointer finger) to pick up materials to investigate.

Of course, using the term pincer grasp is not necessary. Simply model the grasp for your child.

There are other playful and age-appropriate ways to develop fine motor skills. Making objects with play-doh helps develop all hand muscles. Tearing scrap pieces of paper to make a picture collage is another helpful project. As we have previously discussed, threading beads onto a pipe cleaner or even yarn can develop the muscles necessary for a proper pencil grip. These are all preschool appropriate activities.
Always fun and important is the exciting hole punch! We find children love to punch holes in paper. Think about the muscles that are being strengthened as children punch away. You can even collect the small holes to make an art project.
It’s not just the hand muscles that need to be developed.  Strong arm muscles help children control their hand movements. Children can do wall “push-ups” by facing the wall, putting their hands on the wall and pushing back and forth. These wall push-ups strengthen all the muscles necessary for pencil control. And – be sure to have fun while doing this! Children can sing and move at home. If it’s a preschool activity, this is a wonderful way to help children form a line. Ask them to do wall push-ups while waiting for the class to get ready for a new activity or while waiting in a hallway.

The key to a good pencil grip is to strengthen muscles in an age-appropriate and appealing way.
Posted by Kathy at 6:14 PM No comments: