As we highlight the accomplishments of women in March, we thought it would be fun to take a look at our oceans, where so many female scientists have done amazing work. But before talking about these women*, begin by introducing your children to what an ocean is and how it can be studied.  In this lesson, you can emphasize concepts such as weather, transportation, and special clothing, which are a natural part of the curriculum for young learners.

First show your class a globe. Spin it around and show children that oceans make up a lot of our world. Ask children to point out all the water on the globe. Realizing that the oceans are colored blue helps them to develop an understanding of how to use text features in the future.

Explain to children that today you will be finding out more about oceans, their water, and what lives in them. Show children several pictures of different ocean scenes (easily available on the Internet). These should include: the Arctic as this is a good example of cold water, a warm ocean area near the equator, and a picture of a storm on an ocean. Hold a “grand conversation” about the many differences they can observe about oceans.

Next talk about the type of water that is found in oceans. Show two containers of water and a container of salt. Put the salt into one container and stir it. Explain that ocean water is salty. Ask children to ‘turn and talk’ in response to the question: Can people drink ocean water? Ask children to imagine what this might taste like. Some children who have been swimming in an ocean might share their experiences.

Finally, have children make their own depiction of a scuba diver. You can pre-cut materials as shown below so children can create a scientist who learns more about the ocean habitat. You can even encourage them to make up a story about what their scientist discovered about an area of the ocean. 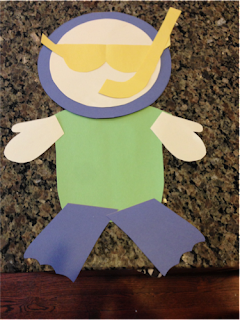 *Next week we will share some female oceanographers.
Posted by Kathy at 10:45 AM